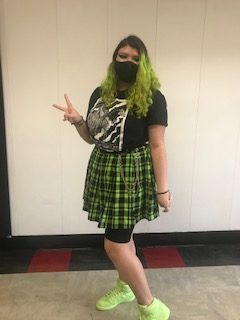 Self expression and personal style is extremely important to everyone. It’s how we identify each other and how we show our interests. From clothing preferences to our makeup routine, style and self expression both help us feel confident and lets everyone know who we are.

How we dress is how people perceive us. If someone dresses up in alternative clothing and dark makeup with eyeliner, someone might see them as “emo” or “attention seeking.”

If someone dresses up in basketball shorts and a tank top with Nike shoes, another person will see them as “sporty” or “just another dumb jock.”

The thing is, most people don’t wear what they wear to get attention from everyone. We wear what we think is fashionable and fun. People want to feel comfortable and confident.

Sophia James is a senior at YC. Most of the time you can pick her out of the crowd because of the fun style she has. Some days she shows up to school in a colorful head wrap and dress, other days it’s a sequin skirt and bright makeup.

James says that her Mom is a master thrifter, and has found a lot of wacky clothing over the years. She says she finds a lot of her outfit components at Goodwill.

James says that her outfits do give her confidence because she wears what she has for herself and not others. “If I’m wearing something really cool that I really like, it makes me feel really excited. Like, I have a dress with pockets and when I wear that it makes me really happy.” James said.

However, there is a bit of a dark side to  having an eccentric style. James says that she has been called names in the hallway and often referred to as a clown because of the way she looks. She says that a lot of people just don’t get why she expresses herself the way she does.

James says that she doesn’t care what people think of her and will continue to show it by expressing herself how she wants. She stated, “The fact that I can wear this and will wear this and that I’m not conforming to what you want makes me feel powerful. Like, I can make my own decisions.”

Another student at YC is Isabella McMullen who is a sophomore. She stated that her style is definitely more alternative and punk than anything else. She is usually found wearing colorful makeup and eyeliner and well as chokers, rings, graphic t-shirts, and punk rock skirts.

McMullen says that she likes to mimic things she sees on television. She grew up watching a lot of horror movies and she had parents who let her express herself how she wanted. Her style is very catered to her own interests rather than an attempt to be popular.

When asked if she feels more confident in this style, McMullen said, “It makes me feel cool. Like, I don’t feel more confident. I don’t really feel like, popular or anything, but I feel like it’s just very catered to my own interests.”

Showing off what you like can be challenging, because not everyone will perceive it in a good way. Your aesthetic is what you make it. Whether you wear hoodies everyday or dress like the next basketball star, if it makes you feel good, it doesn’t have to make sense to anyone else.