The Brilliance Behind Schitt’s Creek 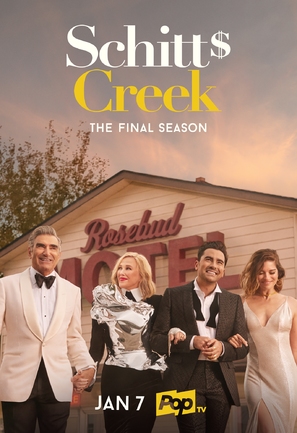 The sitcom, “Schitt’s Creek”, was filmed in Canada and it wasn’t promoted on American T.V. until it started getting more popular. Dan Levy started writing “Schitt’s Creek” originally so he could separate his name from his dad, Eugene Levy.

He got the idea from reality T.V. shows and who the people in them would be if they weren’t popular for their money. Once Dan realized how big the concept of “Schitt’s Creek” was, he asked his dad for help considering Eugene Levy’s background in comedy.

“Schitt’s Creek” is about an extremely wealthy family of four, the Rose family, getting scammed and going bankrupt. The only possession left was a town that was bought as a joke called “Schitt’s Creek”.

Throughout the show, there is lots of laughter as you watch the characters navigate not having money and having to live in close quarters. The show progresses with weird characters and quirks of the small town.

Through living together the Rose family became closer than they ever were. At the beginning of the show, Johnny and Moira Rose were really disconnected from their kid’s life but through living in the same motel they ended up leaning on each other a lot more than before.

Every little detail is constantly thought out throughout the show. This is shown through the characters’ personalities because they are so well thought out that it is so easy to get sucked into the show.

The mispronunciation of words by the main characters adds even more detail and comedic value to the show. Another intricate detail is the thought-out clothes that the characters wear, specifically Moira Rose.

Upon other things representation is one of the most important parts of the show. “Schitt’s Creek” includes lgbtq+ representation. It shows the process of coming out and the fear around it and it shows an easy way to understand pansexuality. The metaphor they use for pansexuality is “it’s about the wine, not the label”.

I would give the show an overall rating of 5 stars. “Schitt’s Creek” is PG 14. It is one of the only shows I’ve watched that has made me laugh every episode.