Minecraft And Why You Should Play It 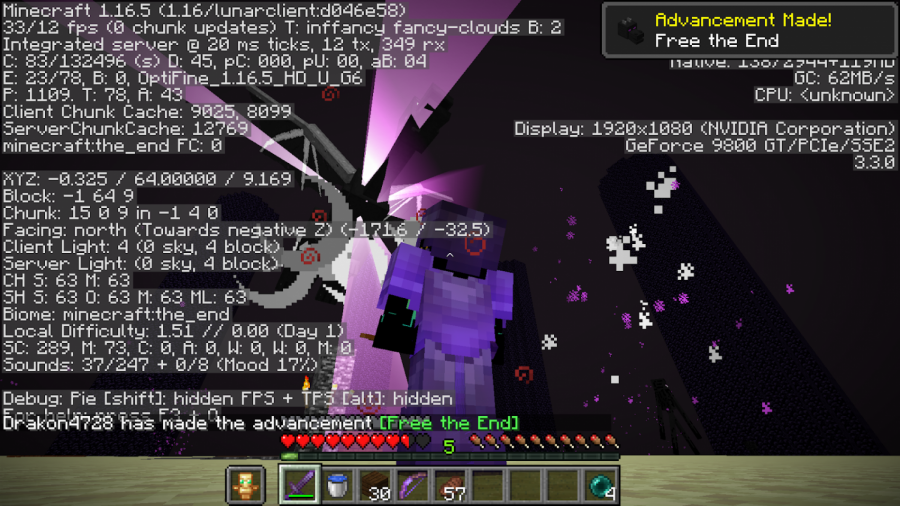 In the final stage of Minecraft, you finish by killing the Ender Dragon.

Minecraft, many kids, teens, and even adults play this game. It can become a peaceful open word to a stressful combat zone.

Minecraft can either be an open world game that has endless possibilities from a peaceful survival world to an online game where you can play minigames with your friends or other people. Minecraft is a game that can be played anywhere, it can be played at a house or on a road trip because it’s also a mobile game and you can play without wifi.

Minecraft has become a very popular game in the last few years, with minecraft being this way, many people decided to create a youtube channel like Dream and Technoblade and others have also made a twitch channel like Tommyinnit and Ph1LzA.

One of the main goals of Minecraft survival is to beat the ender dragon. Many people have also decided to speedrun doing this a whopping 11 minutes and 20 seconds,(held by TheeSizzler) in 1.16+. It usually takes people hours to complete the game if you’re not trying to speedrun (trying to beat the game as fast as possible) or if you’re in a hardcare world where you only have one life you might want to think about taking things slow.

There are two main things you can do in minecraft. You can play a peaceful or stressful survival world, or you can play on a server.

The largest server right now is Hypixel, with an average player count of 80k-90k.

On Hypixel you can do so many things, you can do parkour, tons of minigames

like bedwars, skywars, party games, skyblock. On Hypixel you are able to play whatever game you want and get coins for that game and exp for the game and for your Hypixel level, but with those coins you’re able to buy cosmetics on the shop and have those while you’re playing your next round.

Minecraft is a very simple but complicated game, redstone is probably the most complicated thing to figure out in minecraft. With redstone you can make automatic walls, bridges and tons more. The main thing about minecraft is that you can take it anywhere you want but, It’s probably not as good on a phone as a computer.

Minecraft has two versions Bedrock and Java. Bedrock is not as popular as Java because it doesn’t get all the same updates as Java. Java has a different PVP (Player Vs Player) style than Bedrock which some people like and some don’t. Java gets a lot bigger and different updates than Bedrock because it’s more popular.

An exciting new update coming to Minecraft Java edition is that the new 1.17 update is coming out. The new Minecraft update 1.17 is the Caves and Cliffs update. They will be adding so many new things that you can do in minecraft like wireless redstone, finding crystals. A new ore copper, New mobs being the Warden, Axolotls, and goats. This update will be coming out in the summer of 2021.

Minecraft may be an amazing game but it’s not free. If you want to play on a computer you will have to spend about $30 for either of the versions. If you want to play on mobile you will have to spend about $7 to play. The price is reasonable for the fact that there are tons of things you can do on minecraft and they are continuing to make so much more, plus this amount for a PC game isn’t too bad, and for the mobile version it still has so many things you can do.

This game is targeted mainly towards kids and teens but still many adults play this game because they think it’s a great game. The game can be good to relax or to get stressed. While playing one of Hypixel’s minigames you don’t know what’s going to happen or who you’re playing with. Sometimes you’ll play with people that just installed the game or are ok at it and others you’re going to be playing with people that play the game every second of the day.

On Minecraft Bedrock you can friend others and let them play on your survival world. On Minecraft Java however you have to either find a free server making website like Aternos or pay to create a server to play on with your friends. On these servers you can add plug-ins or mods to make the gameplay different.