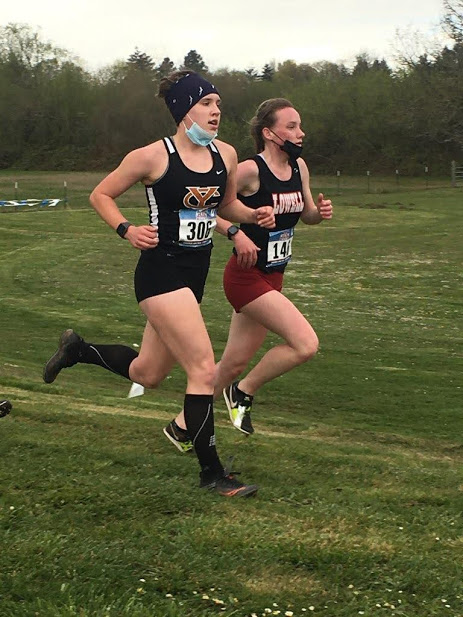 This race has been Cristin's best race since sophomore year at districts. Photos provided by Cristin Brethower.

On the weekend of April 10th, Cristin Brethower, along with Coach Tracie Looney, Coach Audrey Lichten, Sophomore Elizabeth Martinez-Geronimo, and Freshman Nolan Chadwick, went to Cheadle Lake and blew them out of the park.

Finishing with a time of 19:42, it was the fastest race she has run all season and is only eight seconds slower than her personal record (PR).

“I was afraid I would go out too fast in the first mile, but it was a 6:10 split, which is about normal. My next two miles were each around 6:30, and my third mile was faster than my second, which feels really good” Cristin said regarding her race times.

In her final sprint, Brethower passed both Zoe Rector from Riverdale and Kaley Schneider from Lakeview securing her second-place finish.

“In the last 400 meters,” Brethower said, “I passed the girl that beat me by a few seconds at districts. Once she was behind me, I was just trying to hang on and not let her get back in front of me. On this particular course, the last 200 meters or so were a straight stretch after a corner. My finishing kick after that corner was motivated in part by fear of who was behind me, and then I realized there was another person within reach. Finding that last little bit of strength to be able to pass her right before the finish line was the absolute best feeling ever.”

Brethower describes this race as her Magnum Opus. As her final year running for the Yamhill Carlton Cross Country team, she wanted to do something special for herself and the community.

“I had struggled to feel like I was leaving everything out there when I raced this season; it was really important to me that I found that capacity in this race. One of my goals for a while has been to win state. I was ranked 6th going into the race, so I felt like I had something to prove,” Brethower said, “Losing my mom back in August changed everything in my life, but running remained an anchor in my life through everything. My coaches in particular help me to feel like I can still chase my goals at the same time I am processing major changes in my life. So I want to say thank you to my friends, mentors, and chosen family for believing in me and showing up to help when I most need it.”

Brethower described how it felt to finally cross the finish line after a long race and an even longer journey to the top, “My face and arms were buzzing but also kind of numb at the same time from the adrenaline of my finishing kick. I was happy that I had passed someone right at the end, but I didn’t really comprehend that I had placed second until I heard someone else say it… I started crying at some point because I was so overwhelmed by all the emotions I was feeling.”

Brethower has been running for over a decade. “I started track in 6th grade and XC in 9th,” said Cristin, ” When I was little, like three or 4 years old, I got to hang out at my brother’s track practices and always wanted my mom to time me running the 800.”

Brethower also knew she was going to be standing on that State podium well before she started Cross Country in the 9th grade. “No idea how little-me thought it was fun, but clearly something happened,” she said.

Elizabeth Hetzler, a junior at Yamhill Carlton High School, had this to say about the final moments before Brethower crossed the finish line, “Nobody deserves this more than Cristin did,” said Hetzler, “I witnessed firsthand how hard she worked to get to that point, but more importantly, there was so much going on behind the scenes that made this pay off. Nobody gave her recognition for all the extra miles she ran outside of practice- but she still did it because her goals were clear. Cristin knew what had to be done in order to achieve her goals, and she did it. She is an incredibly tough person and definitely earned her spot on that podium!”