Bloodshot: A Bombastic Thrillride with Little Regard for Telling a Compelling Story (Review) 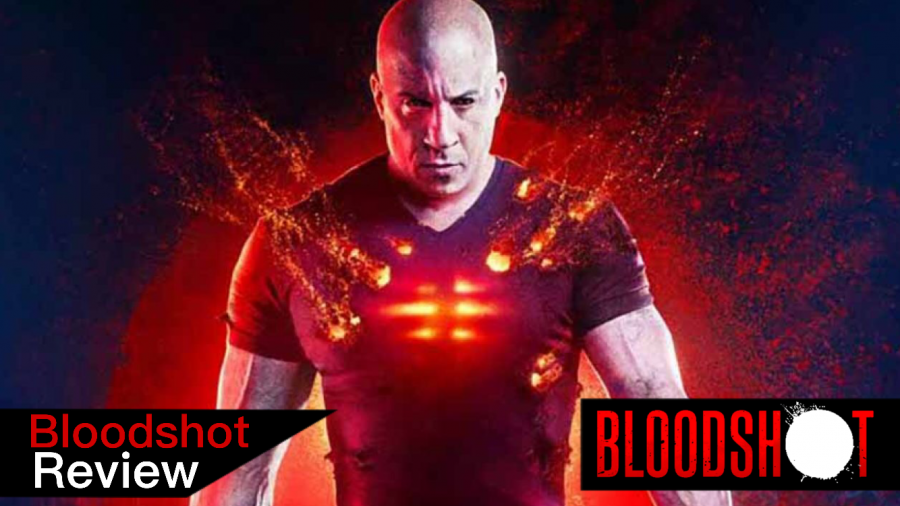 Bloodshot is exactly what I presumed it would be. It’s a fast-paced, action-packed, violent thriller with little mind for telling a competent story. That’s not necessarily a bad thing, though.

Bloodshot, based on the Valient Comics comic series of the same name, sees Vin Diesel as Ray Garrison, an elite marine that’s murdered alongside his wife by a lunatic for seemingly no reason. At least, that’s how the beginning of the film frames it.

After waking up in at RST (Rising Spirit Technologies), Ray learns that a group of people have brought him back from the dead using nanites, microscopic machines that exist inside of him. The nanites make him nearly invincible, capable of enduring monstrous amounts of damage, they have the ability to heal him no matter how badly damaged, and making even stronger and faster than he was prior to the enhancements.

The basic set-up of the film is similar to the newer Bloodshot comics. In the comics, Ray Garrison is a marine who was brought back from the dead by a corporation similar to RST, and they use him almost as a contract killer. They create a false reality in which someone murders him and his wife, and then use his desire for revenge to eliminate the target, then his memory is wiped and they restart with a different target.

In the film, the plot is effectively identical, with a few alterations. Each of the targets Bloodshot eliminates in the film are ex-RST employees who abandoned the company after learning that Dr. Harting (played by Guy Pearce), the main “villain” of the films, plans to weaponize the nanites.

While not the most original or unique plot, it’s generally fine and services the story quite well. It’s a fairly stereotypical action movie “revenge plot”. There are some fun and pretty solid twists and turns in the movie that are worth keeping unspoiled, as it helps tie up loose ends with the plot. But of course, the plot isn’t the best part of Bloodshot.

The visuals in this film are absolutely awesome. The action scenes are phenomenal, and they all feel really visceral and well-constructed. Despite the strong presence of violence, it’s never gory or nearly unwatchable, like 2018’s Upgrade (which was a hyper-violent, gory action-thriller).

One action scene in particular was excellent; it takes place in a dark tunnel, and Bloodshot crashes a truck carrying bags of flour to block the convey transporting the man he thinks murdered him and his wife.

The guards leave their vehicles to examine the scene, and in a shocking change for an action movie, Bloodshot has some of the most competent-at-their-job guards of any movie I’ve seen, which is nice. In a lot of ways, I think the film is aware that it could veer into cliché territory, but it often just barely avoids that.

The guards drop flares, which lights up the tunnel in a bright red haze, and thus commences one of my favorite action sequences of recent memory. There’s a lot of really well-choreographed, awesome action sequences in Bloodshot, many of which feature really good cinematography, and a lot of the time, it makes up for the story deficit.

The CGI was also surprisingly tight in the film. Often times, CGI in smaller-scale action films can look shaky most of the time, but Bloodshot rarely suffered from this issue. The only times I noticed any rough CGI was towards the end, when Bloodshot is fighting two other enhanced individuals.

The CGI starts to look a little wonky on their faces and bodies, when they’re moving really quickly, specifically when Bloodshot tackles the person he’s fighting and they tumble down an elevator shaft and slam into the top of the elevator.

The reason the CGI looks rough is because when you have a CGI action scene that moves really fast (such as two characters fighting each other as they fall down an elevator shaft), then the motion of the characters, and often times the camera, can mask the weird facial CGI, as trying to animate a face or use facial scanning tech or any number of techniques to make a perfect CGI recreation of Vin Diesel would be too time-consuming and impractical for a “blink-and-you-miss-it” action scene.

This technique can also help to distribute more of the budget to other parts of the film’s CGI, raising the overall quality of the film a slight bit.

However, this isn’t a negative. I only noticed this because it’s something I’m hyper aware of; most people likely wouldn’t notice it, they’d be focusing on the action itself, not the characters’ faces. Outside of what I’ve described (which has a reasonable explanation), the CGI is rock-solid, and quite honestly, is some of the best I’ve seen in a smaller superhero film, hands down.

But what about the characters? Well, it’s about what you might expect from a film like Bloodshot. There are standout, fun characters like Wilford Wiggans, but generally everyone is pretty good. The acting is all quality, and the interactions are well-written and well-acted. Jeff Wadlow and Eric Heisserer co-wrote the screenplay for the film. Eric Heisserer has also written for the Bloodshot comic series, which was nice to find out.

Vin Diesel is actually fairly good in the role of Bloodshot. He can obviously handle the action parts, and he looks the part, but even when he’s actually acting, he’s probably putting more effort into it than most of his other roles. There are shaky moments, but there are many scenes where he injects subtle emotion into his acting.

All around, this is probably one of his best roles, as I think it’s allowed him to be an action hero (something he’s used to), while also drawing on and forcing him to improve his abilities as an actor, although he is still Vin Diesel so expect some hammed-up moments.

Overall, I think Bloodshot is a really solid movie. It might have clichés and tropes littered throughout it, but it acknowledges those clichés in a strangely meta way.

The CGI is top-notch for a film of its caliber, and the action is well-choreographed and awesome, which is exactly what I wanted from the film going in. The story might not also be top-tier, but it’s fun, full of twists and the cast of characters it puts together tie it all together into a fun, nonstop thrill-ride of a film.

Bloodshot is currently available to purchase on Blu-Ray, DVD or digitally, and is rated PG-13.