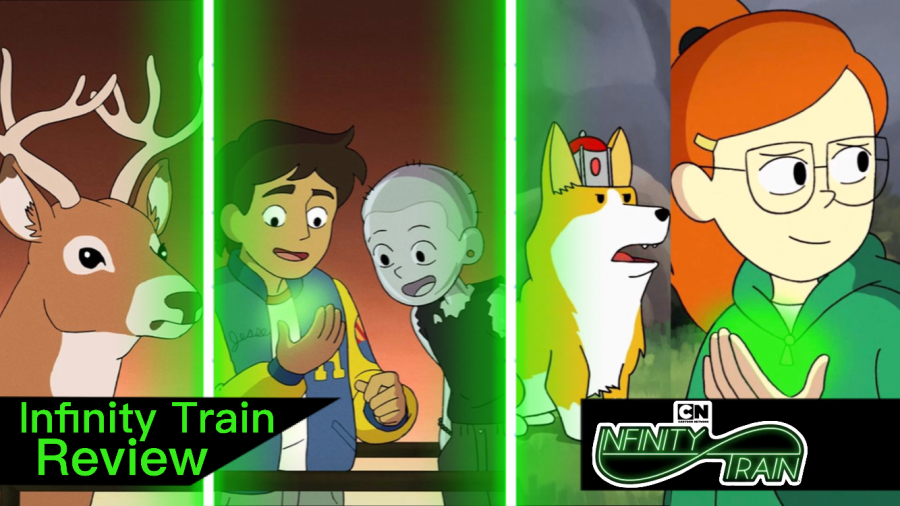 Originally pitched to Cartoon Network in hopes of getting picked up for a full season, Infinity Train follows Tulip, an aspiring game developer, as she struggles to escape an inter-dimensional train that she became trapped, all while working through the emotions she’s kept bottled up over her parents’ divorce and how their separation affects her day-to-day life.

The show gets even crazier when Atticus, a dog that speaks English and is the ruler of a kingdom of corgis, and a robot named One-One, which is two robots, one of whom is incredibly pessimistic while the other is very optimistic, work to resolve their own problems and help Tulip on her quest to escape the train.

I mentioned earlier that the show became a series after a pilot episode was pitched to Cartoon Network, a popular TV network, which after four of its most culturally significant shows ended, sorely needed creative, unique content to maintain its viewer base.

The pilot episode, along with countless other pilots, were posted on YouTube in 2016 as a way to gauge real viewer interest in potential shows, where it went on to become the most viewed pilot posted by a large margin, currently sitting as 5.1 million views as of 2020.

Thankfully, the executives at Cartoon Network realized that Infinity Train was a show that their network couldn’t live without, especially as their quintessential shows, Adventure Time, Regular Show, The Amazing World of Gumball and Steven Universe were all coming to an end one by one.

The Infinity Train pilot revolves around Tulip already being on the train, and going through the adventures that exist in a single train car. The series explores her life before, during and after the train. Her journey to escape the train is the central focus of the series, as it should be, and it’s appropriately fun and exciting, however, it’s always nice to see more of the world of a show with such a specific premise.

As I mentioned, Tulip is a well-written, uniquely detailed main character for the first season, and the passion that has gone into her character design and her background, as well as the excellent voice performance from Ashley Johnson, all combine for one of the best main characters in a recent animated series.

Her companions Atticus (voiced by Ernie Hudson) and One-One (voided by Owen Dennis and Jeremy Crutchley) are equally as unique and engaging as Tulip herself. Ernie Hudson delivers an endearing, hilarious performance as corgi royalty, while Owen Dennis (the show’s creator) and Jeremy Crutchley give delightfully polar opposite performances as Sad-One and Glad-One respectively, the two halves that make up the robot One-One.

Despite the short time these characters know each other, by the end of season one, you really get the sense that they care about each other, both from the excellent performances and the great animation.

Infinity Train is surprisingly dissimilar to other Cartoon Network shows such as Steven Universe, Adventure Time or even older shows like Courage The Cowardly Dog or Codename: Kids Next Door, wherein it lacks a centralized antagonist, specifically in the first season.

That’s not to say there aren’t obstacles and opposition. The conductor, a crazed robot who’s overthrown the previous controller of the train and seized control, actively tries to stop Tulip or impede her progress to escape the train, in what I consider to be one of the best ‘twist endings’ to a Cartoon Network show in recent years.

But generally, there’s more than one antagonistic force. Rather than having solely an external antagonistic force, Infinity Train turns the tables and utilizes Tulip’s suppressed feelings over her parents divorce as a driving point of the season. Essentially, Tulip has to confront the way she truly feels about her parents’ divorce and work through it in a healthy manner to advance her progress on the train, instead of bottling up her feelings.

The ways that season one manages to externally show internal conflict and struggle is absolutely just as unique and well done as every other part of Infinity Train.

As for the big final reveals of the season, I think it’s best to go in blind than know how it all goes down.

There is one particular episode that needs to be mentioned. Not because it’s the best of the season, or is the utter bottom of the barrel the show has to offer, but for how it provides the perfect transition point into season two.

The episode, entitled “The Mirror Car”, follows the trio as they make their way through a car chock-full of reflective and mirrored surfaces. This car is where the reflections of what can only be assumed is all living creatures are “stored”, and it’s where we meet Tulip’s reflection for the first time.

Tulip’s reflection, Mirror Tulip (MT for short), realizes that finally she can communicate with Tulip while in the car. As Tulip reaches the end of the car and is ready to leave, MT lies to and tricks Tulip into letting her out of the reflection world. Unaware of the consequences, Tulip agrees, thinking MT will help her and willingly return to her contained life. Only, she obviously doesn’t.

MT tells Tulip they’ve got to swap places so she can open the door, but as soon as they do, MT attempts to make her escape, with Tulip now pulled into the mirror world. Tulip meets the Mirror Police, who enforce the barrier between the real and mirror worlds.

MT eventually realizes she’s cornered by her pursuers, but after a meaningful conversation with Tulip, the two agree that MT can exist on her one through a mirror in a multi-tool that belongs to Tulip. After this, the season continues, with MT a fugitive of the mirror law, and Tulip reflection-less.

However, where season two picks up is with MT on the run, and as the main protagonist for the season. As she goes through the cars, we finally get a chance to connect with her as a character. She wants to live her own life, and can often be brash and rude to others who try to be friendly towards her.

Particularly with Jesse Cosay, the second protagonist of season two. Jesse, like Tulip, is trying to figure out how to escape the train, only he’s enjoying his time on the train far more. MT and Jesse cross paths after they both separately encounter a deer with strange mystical powers, created by the train as a way to guid passengers down the path to being a better person, and getting off the train.

MT thinks of this super-powered deer as her best friend, since it can’t speak. Unfortunately for her, Jesse finds the deer, and decides that all three of them will be friends, naming the deer Alan Dracula.

Similar to the first season, the trio go car to car, encountering new people and challenges, only now the main character is running from the antagonists, while Tulip was running towards them.

The Mirror Police finally get more character development in this season, and despite their obvious roles as antagonists, are able to play major parts in the episodes, with the main Mirror Cop, with an excellently cheesy and awesome performance by Ben Mendelsohn.

In both seasons, the antagonists get subtle or small bits of character development, but are unsurprisingly one of the highlights of each season. For season one, the conductor was an ominous and crazed villain, but once the truth was revealed, you understood their character motivations.

For the Mirror Police in season two, the choice to focus on them far more really helped them grow, giving them actual backgrounds and lore as to how they became what they are, instead of just “blank slate antagonists” chasing the main characters.

Infinity Train is a pretty strong example for a series that values its antagonists as much as its protagonists, similar to other Cartoon Network shows. However, I think it works better than other animated shows because of its scale. With Infinity Train, the antagonists are really only a threat or challenge to the main character, not a catastrophic, world-ending one.

With MT, Jesse and Alan Dracula, I really enjoyed the development they all went through, with each other and themselves. One particular episode, “The Frog Car”, stands out in season two. The trio are faced with a simple moral dilemma. Kick a talking frog, the door onward opens. Don’t kick him, you can’t proceed.

Besides the funny setup, and the frog being a delightful and fun character, MT and Jesse go through some pretty rich character development. The Mirror Police reveal to Jesse that MT is a Mirror World fugitive, while trying to break into the car, and Jesse reveals to MT why he’s on the train.

Jesse’s reveal was quite shocking when I first saw it, but in the ending of the season, he manages to make amends, understanding that what he did was wrong, which was really rewarding to see, compared to him before the train, where he didn’t really realize the issue with his actions.

All that said, season one of Infinity Train is an outstanding, richly detailed, unique, and strangely moving season of television that was well worth its wait, but season two is where the series finally, truly hits its stride.

With all the major pieces put into place, the series can finally soar, utilizing excellent lore, phenomenal writing and character relationships to craft what I think is one of the best, most rewarding animated series of the last ten years, and I absolutely recommend the series to anyone looking for a richly detailed, unique, creative series full of masterfully crafted characters and emotion.

Infinity Train is rated TV-PG and is available to watch on Cartoon Network and Hulu.