On the Road to State 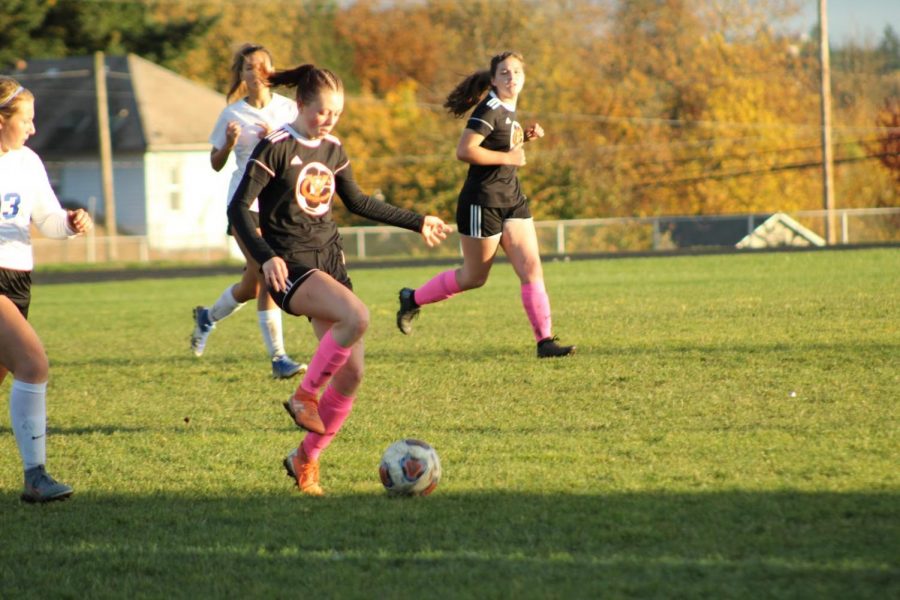 Last year's soccer games looked much different than this year. In this photo from last school year, student Hannah Jolly kicks the ball in a game against Blanchet. This year, soccer students are required to wear masks while competing.

Yamhill Carlton girls soccer started the year off with 8 shutouts and first in league with an 11-0 record.

Senior Lisie Luttrell, who plays center defender says, “ I think we’re going to finish pretty well most likely we are going to make it to the playoffs, and we probably are going to host a game. I feel like we can go far in state, but it will depend on how well we play when it comes down to it.” Junior Allie Amerson who plays wing agrees with Luttrell for how well they’ll do. She also says, “I think that we will finish on the top of the league. The first half of season went really well we didn’t lose a single game during the season.”

Though you can’t focus too far ahead you can focus on how much the team has improved. Luttrell says, “I think we have improved as a team and we have learned to play with each other a lot better and we are connected better on passing, we just know each other better so we are playing better.”

Their coach Brittany Hartmann says, “My coaching staff and I really focus on team chemistry. We develop that through team bonding and trust activities. I think that everyone supports everyone on the team. We truly are a family. The culture is what drives that bond.” Getting the right chemistry on a team is very important for a great outcome.

Amerson says, “The beginning of the season was pretty rough we didn’t have very much chemistry but by about halfway through the season I feel like we figured it out, at least learned to know each other.” The bonding of a team is important as well as how well the team plays in general. Senior Elisabeth Lie who plays forward says, “I think that we are actually having a good team spirit. We are getting along better and you can see that in the way we play cause we actually play like a team now.”

Senior Samantha Clements who is their goalkeeper says, “I think that we have improved a lot with finding feet and playing the way that we face.” Even though they lost the first game that was a non-league they came back. Hartmann says, “Losing to OES in the first round was a huge wake-up call for us. We were out of shape and a bit sloppy. Watching them earn 7 shut-outs in a row has been pretty awesome!”

The team is determined to keep pushing forward and going as far as they can. Hartmann says,

“I think this year will end on a much more positive note. We have been steadily improving every year. So I feel like we finally have a solid enough crew without any drama to take us there.”

With their first place in the league, the next step for them is going to the playoffs.