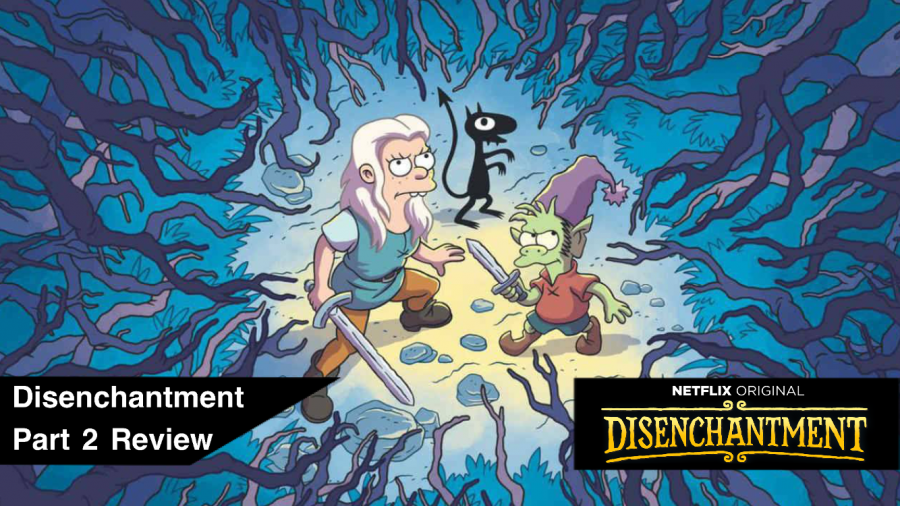 Credit to Netflix and Matt Groening.

“Disenchantment” is an animated fantasy/comedy that premiered on Netflix during the summer of 2018, and season two premiered in September of this year. The central plot revolves around a rowdy princess, Tiabeanie (played by Abbi Jacobson), often shortened to just Bean, going on incredible and dangerous adventures, typically at the disapproval of those in the royal court.

The strongest point of “Disenchantment” season one was its excellent characters, and how well they interacted with one another, and that has absolutely carried into the show’s second outing. This time, with the added benefit of an entire season under their belt, the team behind the series can jump right into the character interactions and development.

Even when the plot of season two is at its weakest, the characters are entertaining enough and so well-written that you begin to pay attention to them as a central story thread becomes increasingly muddled.

For example, Bean, along with Elfo (Nat Faxon), an exiled Elf tired of living a monotonous life of being jolly and Luci (Eric Andre), a demon sent to negatively influence Bean, are two great characters that shine in season two, even though they take more of a backseat role this time around.

More than just the main cast, all of the side characters get a moment to shine in at least one of the episodes. King Zog (John DiMaggio), Bean’s father and ruler of Dreamland, the kingdom where the characters live, finally gets the chance to evolve as a character, showing he can be more than just a comically cruel and unfair king, and turns into a very sympathetic character as he struggles to connect with his daughter and be a good father, instead of treating Bean as nothing more than an heir.

One of season two’s biggest flaws, however, was that it pretty much dropped having any main plot thread through the middle six episodes of the ten total episodes. While this is a little disappointing and those six episodes often become nothing more than filler with a few important moments for the characters and plot sprinkled throughout, the comedy is usually there to bail out an overall lackluster episode.

In season one, the comedy was good, but wasn’t as good as it could’ve been. That’s been rectified in season two, as more of the comedy, both clear jokes and funny phrases or notes on signs littered throughout the background, land just as well as they have before, and are consistently one of my favorite parts of Groening’s shows, especially in “Disenchantment”. The latter kind of comedy is something show-runner Matt Groening is well-known for.

Additionally, “Disenchantment” finally begins to establish real lore and backstory for the world it’s characters inhabit, although because each episode is 30 minutes, it feels like there isn’t enough time to really focus on the new bits of backstory. One bit of lore is said once in conversation and isn’t mentioned again. I won’t spoil it, because it was fascinating to learn, but it revolves around the origin of the kingdom’s name, Dreamland.

(Slight spoilers ahead for episode nine!)

This ‘rule of no rules’ around the show’s lore comes into play the clearest in episode nine, ‘The Electric Princess’, in which Bean goes to a steampunk city. This sudden introduction of science, albeit rudimentary, shows that Groening is confident in his ability as a show-runner to balance the different lore that collides as fantasy and steampunk meet.

Unfortunately, this again feels rushed, because Bean spends a total of 15 minutes, at most, in ‘Steamland’, the name of the steampunk city. I will say, however, it’s clear that this is a tease for season three, where Steamland will likely make a return and quite possibly play a bigger role.

“Disenchantment” may be Groening’s latest show, but he’s mostly known for creating ”The Simpsons” and “Futurama”. With ”The Simpsons”, Groening usually didn’t have to worry about connecting any of the episodes narratively.

That changed quite a bit with “Futurama”, a show in which the episodes often connected to and had clear effects on each other, but still could fall into the trap of too many one-offs.

“The Simpsons” is currently in its thirtieth season, “Futurama” ran for only seven seasons, and “Disenchantment” has just put its second season out, so it seems, as Groening creates more series, they become more and more narratively-focused, rather than favoring bite-sized single-story episodes.

“Disenchantment” feels like the show Matt Groening has been working towards for all these years, a show with a clear narrative, that has loose enough rules so that anything can happen. Even so“Disenchantment” feels like the purest distilling of Matt Groening’s creative ability, even if it does struggle to get away from the DNA that carried over from Groening’s previous series.

Ultimately, “Disenchantment” season two doesn’t advance the story that much outside of the first two and last two episodes. Falling into the trap that some second seasons fall victim to, the show often feels more like set-up and teases for season three, than a full-fledged second outing. If you were on the fence the for season one, “Disenchantment” won’t do much to change your mind, but I do believe that if you enjoyed season one, you’ll have a great time with these characters and the world “Disenchantment” creates.

Disenchantment is rated TV-14 and is currently streaming on Netflix.