Hellboy and The Desolation of My Braincells 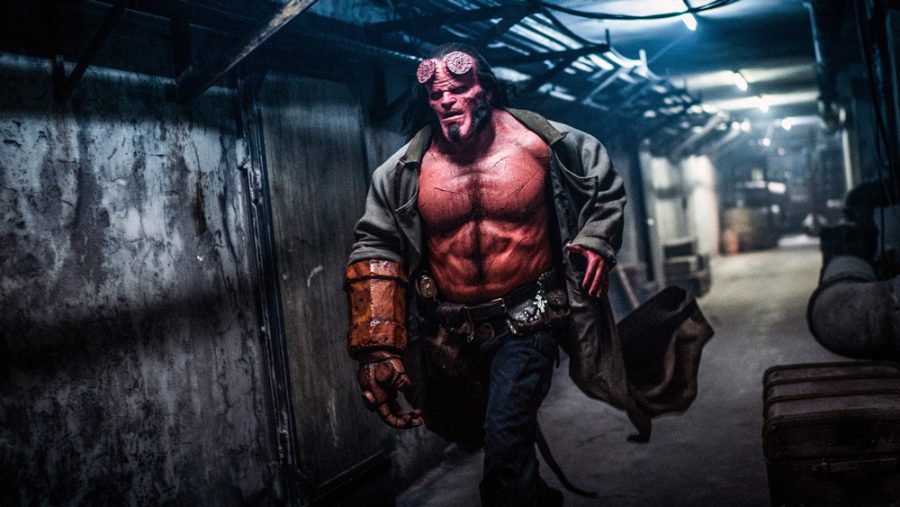 image courtesy of Variety and Lionsgate

There are no words for this movie that can describe to you dear reader how awful this movie is. I cannot think of any words to describe how badly wounded my mind is by this horrendous film, so I’ll let its titular character tell you. “It smashes things real good.” Oh and “things” are my brain cells and “it” is this movie. From the very beginning of this movie it tells you what it is. The beginning dialogue is a narration to fill its audience in on what we’re about to see, and it throws in an F-bomb. Not because it fit or anything but because it could. This movie is Rated R and it goes way out of its way to tell you. Now for films like Deadpool this works; it fits the rest of the film. Here it does not in the slightest way.

The R rating is one of the MANY downfalls of this movie. It was the focal point of almost all its advertising and was possibly the only reason people went to see this monster. The violence here serves literally no purpose. Some movies the R rating adds to the vibe of the film and its fun, here it’s just gross and done with some of the worst CGI I’ve seen in years. Half the movie looks like an unfinished mess. The monsters here are supposed to resemble pieces of Mike Mignola’s artwork (the creator of Hellboy) but it just looks like an awful early 2000’s 3D Universal Studios ride. Actually I take that back, the CGI on those rides look better.

As far as acting goes, David Harbour as Hellboy is the only good actor in this mess. He gives the awful script all he’s got and tries to have as much fun as demonically possible. Sasha Lane as Alice Monaghan is possibly one of the worst parts of this. Not once was I convinced she was an actual person. She always felt like a piece of paper with a face drawn on that gave out lines and barfed up gross and badly animated ghosts with another actor’s head copy pasted on top of it. Milla Jovovich is another awful actor in all of this as the awfully written villain of this film, the Blood Queen. All of her lines are “we belong together you and I in the apocalypse” or “you’ll finish your destiny!” And it’s all oh so boring.

The script in this film is atrocious. It doesn’t feel like a story. It feels like action scenes with the actors jumping around on a green screen crammed into a car and the story is in a trailer barely attached to the car. Oh also the car is driving head on into a house on fire. The script tries to shove in this family Drama between Hellboy and his father Professor Broom, played by Ian Mcshane and first of all, what miscasting. Ian Mcshane is not a father figure character actor by any means. He’s more of that old cool Vietnam vet who’s prepared for when the Russians invade the U.S. kinda guy. The drama here is that Broom didn’t tell Hellboy he was supposed to kill him. Now that could be good only if the the writing wasn’t awful and Broom was properly casted.

Hellboy has no story to tell. It’s a very simple sword and sorcery story but lacks any charm whatsoever. Aquaman has a super simple story but because of its cheesy acting and fun action it comes out alive. This film lacks all of that. The film is reminiscent of other movies like Suicide Squad where it just goes from place to place with no real meaning or purpose. And the character development. Yeah this is almost completely absent. The film is nearly lifeless. One of the few saving graces is the film’s use of practical effects, which for those who don’t know, is monster effects done with makeup and monster suits. Basically anything that isn’t CGI. Hellboy’s look is spectacular and I really love it. The monsters that aren’t awful CG such as the Babayaga look amazingly creepy. Luckily whoever the make up artists is breathed the slightest bit of life into this drown victim of a movie.

The music of the movie is also a weird choice. It tries to convince you you might be watching a good movie but the film’s already done its job of inducing you into a brain dead, popcorn eating, comatose state. The music choices range from “okay I guess this fits” to “what in all that is holy were you thinking.” It’s just bad. It’s pretty much all of 2011’ greatest indie rock hits.

The film attempts to try and hype you up with teasing you of a sequel. Don’t be fooled by this I highly doubt it will get a sequel. At no point in this train wreck was I excited about what I was watching. Never once did a single joke land for me. The pain of watching this was worse than watching my dog eat his own vomit. I hope and pray from now on that such a horrible monstrous evil will be locked away forever and that no one will have to go through the torture of watching this. Hellboy has two good things; David Harbour and its practical effects. Therefore I give this abomination on cinema a F. For absolutely no good reason this movie is rated R for violence that serves no purpose, foul language from people who can’t deliver their lines and gore that does nothing but gross out its audience. Please dear reader, heed my words and never watch this movie. Do not give it the power it craves.