Far Cry: New Dawn and The Dawn of a New Let-Down 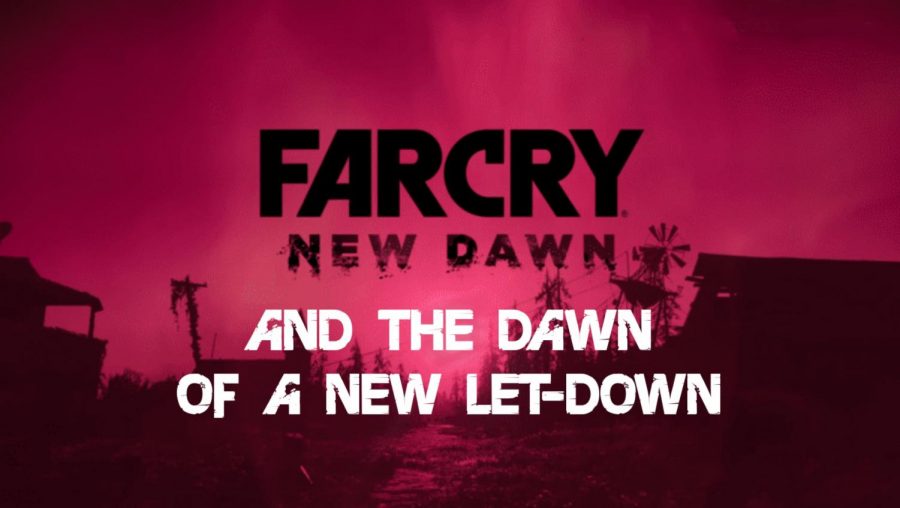 Endings are rarely a good thing. In fact, most of the time, they’re one of the hardest parts of any piece of fiction to write. And video game endings are no exception to that rule. Imagine this; You spend hours, maybe even dozens of hours developing the character you play as and growing attached to them, gathering the best gear in the game, having fun, only for the ending to swoop in and disappoint you.

You’d feel pretty upset, right? That’s how the ending of Far Cry: New Dawn feels. Over the twenty-hour campaign, you craft the best weapons and vehicles, and you finally get to the last mission, only for it to result in a cheap, lackluster finale masked as an over-the-top, bombastic send-off for everything you’ve worked for in the game.

An ending is often the most important of a piece of media, but it might be more important in a video game. Because of the interactive nature of the medium, it allows you to directly get involved in the story, which means when the finale is lackluster, it can feel like you were cheated by the game.

This is the case with Far Cry: New Dawn. The game promises an over-the-top, bombastic experience, and for the most part, it delivers on that promise, throughout the entirety of the main story, right up until the very final mission.

The characters, most of the main missions, the guns, the vehicles, and the gameplay are all very solid. As the game is a follow-up spin-off of Far Cry 5, it’s better to have played 5, or if you want to skip it, just read or watch a summary.

But New Dawn does something right when characters from 5 return, as it explains who they’ve been in the years since the atomic bomb was dropped, and also teases who they were before. This is useful for new players who don’t know the returning characters to learn more of their backstory and also serves as a fun little nod to people who played Far Cry 5.

I’ll try to not spoil the story, for anyone who wants to play New Dawn for themselves, but generally, the game involves you playing a new character, and ends up with you interacting with many returning characters from Far Cry 5. The story was really fun, fast-paced and exciting right to the very last mission, and since an ending is often the most important piece, this revelation was disappointing, given how much time I sank into the story, and how much fun I had.

While the story could be disengaging at certain points, most of the time it was interesting enough to keep you playing, and the fun you had in-game kept me craving more of the game.

New Dawn gave me hours of legitimate fun where I was just exploring the map, fighting enemies and discovering exciting new things. I was really happy with the game I had.

New Dawn is at its best, however, when you’re fighting. The guns in the game are excellent and are all essentially the same as Far Cry 5, but with a new, more “weathered” look to them. But aesthetic choices aside, almost all of the guns control well.

They’re all satisfying to use, especially late in the game when you’re able to unlock high-powered weapons. Generally speaking, New Dawn does only a small amount to innovate the franchise, but all the small things eventually add up to an overall solid entry into the Far Cry series.

One place where New Dawn innovates is with how enemies react to you. For example, in 5, enemies would just show up, shoot at you and never really act like real people. While you might be able to argue that this was for story-related reasons, I chalk it up to a design oversight for the enemies.

But in New Dawn, the enemies react like real people, hiding behind cover, shooting at strategic times, and trying to flank you, most particularly when you have a clear advantage over them.

One anecdote I recall is when I was shooting at two enemies, and took damage, so I ran behind a nearby barn. They followed me, but one hid behind the other side of the barn, and the other hid behind a shed next to it. They both thought I was still in that area they’d seen me run to, more like a real person would, meanwhile I was sneaking around the side of the barn, through some bushes, and I got the jump on them.

I found that most of the time, it was these little anecdotes, these fun little side stories, that gave New Dawn it’s charm and personality, and helped it stand out in an ever-expanding market of post-apocalyptic games.

Also, the game is $40, rather than the typical $60, due to it being a spin-off of Far Cry 5, which allows Ubisoft, the developers of the Far Cry franchise, to reuse the same map from 5, with a small but significant change to a lot of the map and buildings that would’ve come about through an atomic bomb dropping.

The story may not have the best ending, but to reuse an already overused quote, “it’s not about the destination, it’s about the journey.” This holds true for Far Cry: New Dawn.

The game itself is legitimately some of the most fun I’ve had in a game in months, and while I do think that the ending mission, which has you fight the two main villains, as well as a secret, out-of-nowhere third villain, is fairly disappointing, the rest of the game almost makes up for the lackluster finale.

And sure, the “post-apocalyptic game” market might be flooded with a small handful of unique games, and mountains of rip-offs, I think the craziness and bombastic action of the Far Cry series lends itself well to the sub-genre, even if only for just this one spin-off.

If you just want to have fun in a video game and aren’t particularly concerned with story, I’d definitely recommend picking New Dawn up when it’s on sale, for $30 or less. But if you are looking for a fun game and you’re expecting an interesting narrative, I’d still say you should check out the game, just make sure you go into it with lowered expectations, and you probably won’t be disappointed.