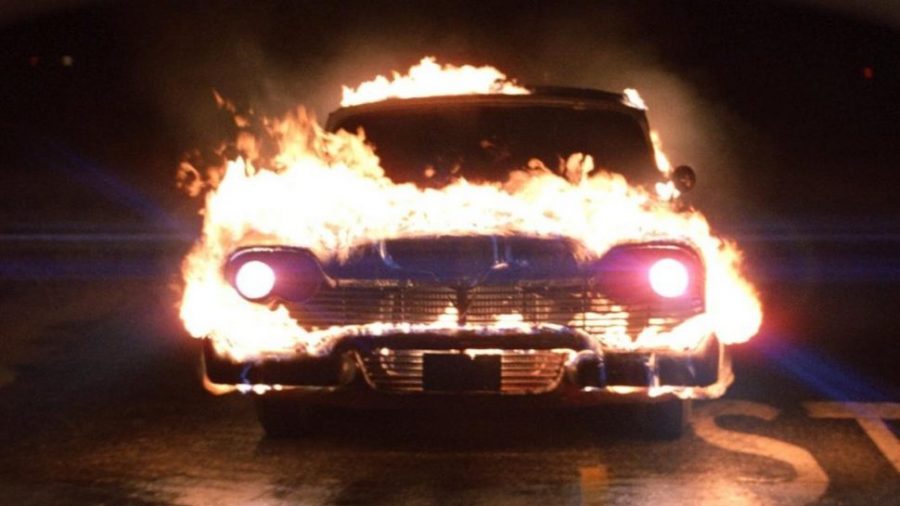 Image Courtesy of The Nerdist/Christine

Christine was directed by the king of horror effects John Carpenter, The original novel was written by stephen king, and the screenplay for the film was written by Stephen King and Bill Phillips. The story is about a loser named Arnie that buys a junk 1958 plymouth fury from a creepy old man. The intro of the film establishes that the car is evil but the reveal of all the horrible things that happened to the last owner shows just how much this car can do. While fixing this car arnie gains confidence but slowly this becomes an arrogance and Arnie distances himself from his family, his best friend, and his girlfriend for his car Christine. And supports Christine’s systematic murder of arnies classmates.

The movie is an effectively eerie film with a unique premise. The acting is good for a time when horror movies were being produced with bad actors left and right. The actor who played Arnie in particular portrays the descent into madness as Arnie becomes a burn out who worships his car. The only problem I have with the movie is the outdated dialogue. The dialogue of the movie really shows its age with characters constantly objectifying the girls at their school and saying some pretty awful things in general. At first I thought this movie was going to be about objectification with christine representing this theme. But that wasn’t really explored in the movie. Luckily as the film continues it moves away from this dialogue and finds an interesting theme to explore.

The main theme that was explored was abusive relationships. At the beginning of the movie Arnie is a “loser” at least that’s how he views himself. He’s bullied pretty badly and has no luck with girls. His best friend, Denis, is always encouraging him and telling him that isn’t what his bullies call him. But he doesn’t let his friend help him, but a sweet classic car on the other hand… When arnie gets Christine, he gets the girl, gets a job, and he gets revenge. Arnie says he loves Christine but Christine doesn’t allow him to have any friends or family. The relationship between arnie and Christine is an abusive one and this analogy is as obvious as it is interesting to see on screen.

It’s the car who steals the show though. The director John Carpenter is a master of horror and well known for his expertise with practical effects. In this movie he proves that he can make even the simplest concept into a visually striking work of art. To elaborate to much would spoil much of the film. My favorite scene in particular Christine is in fire going down a highway with her brights on and the music drowns the audio. It’s a truly haunting shot. Christine is able to repair herself and John carpenter was shoot scene where Christine repairs massive dents and cracked windows.