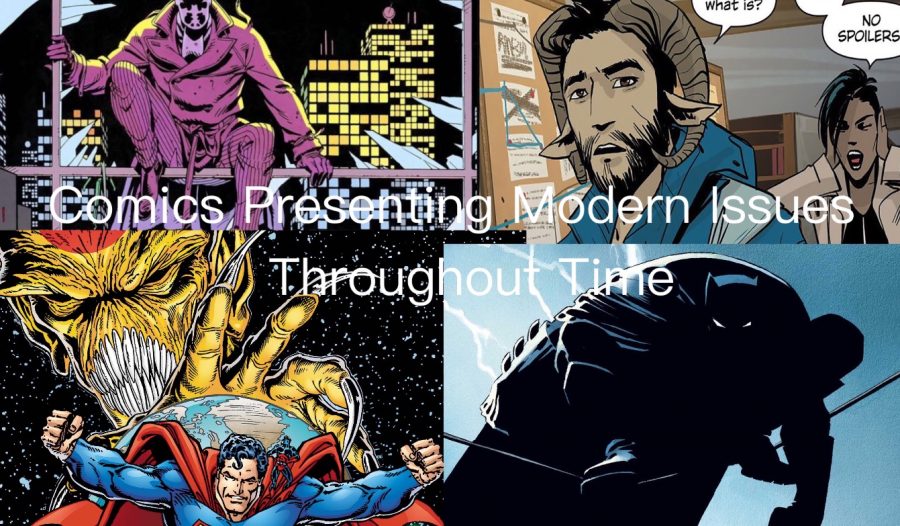 Art is known to imitate life, but I haven’t seen it done more than in the medium that is comic books. Most people see comic books as superhero junk that only kids care about, when that isn’t the case. Most comics in the modern era deal with hardcore adult material, and deal with serious subjects.

One comic I have seen this most prevalent in is the critically acclaimed series Saga. Saga is an adult-oriented comic series dealing with parenting, loss, addiction, and several other deep subjects. The comic is also very much for the LGBTQ+ community with characters being gay or trans and showing themselves to be more than a stereotype but to be a strong character.
The comic itself is one of the first comics to be drawn by a woman as well. Comics used to be extremely male oriented but are now quickly picking up female writers and artists. This is something sadly starting recently but is becoming more and more common.

The comic medium is now showing more diversity behind the pages but what about on the panel? Comics now push for diverse characters with real problems and frustrations. Marvel comics though does not seem to understand what makes this special though.

Marvel struck gold with the creation of one of their most prized characters, Miles Morales Spider-Man. But afterwards they thought that making a character a new ethnicity made Miles special. This lead to the creation of Riri Williams.

Riri was made due to Marvel deciding to kill Tony Stark (Iron Man) and replace him with a ham fisted creation of a character. There are effective ways to create new characters of diversity. Marvel however was the first comic company to have a gay character.

But comics haven’t been dealing with these issues recently, in the 80’s comics went through a drastic change. Nineteen eighty-six saw the year of two comics to completely change the story telling industry. Frank Miller, a writer who brought new depths to Daredevil and created the fan favorite Elektra. At this time DC was having trouble selling comics for one of their biggest characters, they needed a new look at this character, they needed a new Batman.

Frank Miller gave us new and old characters that gave us what we wanted. He gave us a terrifying Joker and showed us broken minded people. Batman The Dark Knight Returns was one of the most influential comics made and changed the realm of comics. Another comic to come out that year that dealt with similar issues.

Watchmen dealt with broken characters and fear.  Watchmen took the idea of broken heroes and gave them their own political ideologies and giving them definitive characteristics other than a costume. Rorschach was a stand out character in this comic and a fan favorite for his radical ideologies. The comic made people think. It made them ask what would they do for true world peace?

A question brought up by the comic. Alan Moore took his ideas of deconstructing the superhero archetype and tearing down his characters. The book deals with the ideas of actual people dealing with the fear and hardships of the time.

The comic was a simple premise of aliens coming to destroy Earth but what really took the comic out was the Alien design. They had yellow skin, slanty eyes, huge teeth, and worst of all..they straight up had the Japanese flag on their forehead. The comic presents these Aliens in a way that presents the aliens in an awful light. The antisemita things presented in this comic aren’t exactly great, but DC isn’t the only one to do this.

Captain America was created in the height of World War II, the time period was full of racist propaganda and outlandish ideas about race. This is obviously some great lead up for comics. In a time where it was okay to be racist (for whatever reason) a hero, now loved by many, calls Japanese Soldiers a very very very very very racist remark that in no way feel comfortable restating.

The comics of the time were all very patriotic but none as patriotic as Captain America. The star spangled hero was known for punching Naziand Japanese soldiers. This leads to some things that nowadays are not okay.

Comics still have their issues, no one is safe from tropes and such but everyone has an opinion on modern issues. Comics deal with things most artists do but put their own twist on things. Comics are a form for people to tell their own stories in their own ways.

I love comics, they’re an amazing type of media that brings happiness, anger, and world events to light. Comics are art, and art imitates life. Or does life imitate art? That’s up to you. Make your own heroes, make your own beliefs but please…don’t make racist comics.