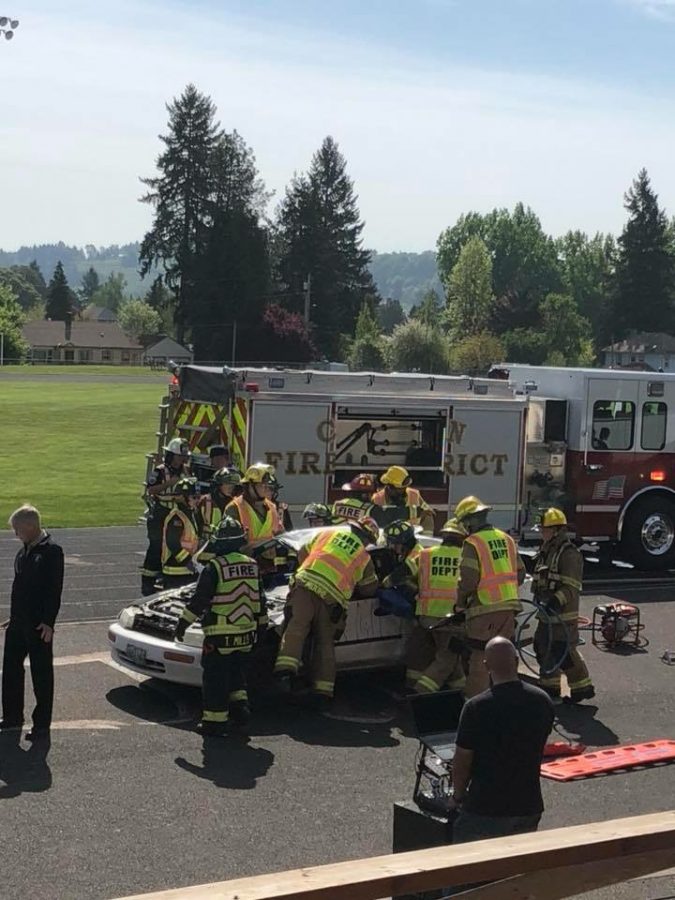 Yamhill Carlton High School recently held a graphic assembly addressing SKID (Stop Kids Impaired Driving). SKID is a reenactment of a fatal DUII (Driving Under the Influence of Intoxicants) car accident. Principal Gregory Neuman says this event is very impactful and very realistic. Neuman got incredibly emotional at his first encounter of SKID. The visual nature of SKID can really impact students. Although it’s not real, hearing and seeing your peers in this situation can be very moving and emotionally disturbing to watch. Neuman addressed that it is different to read about a student attending another school being in this situation because it does not affect us as much when we don’t know that individual. But when you are in front row seats to the situation involving your friend as the victim, it’s very powerful and moving.

A brief rundown of the plot in SKID, Chandler Morris, Colton Saddoris, and Bella VanHorn

are at a Prom after party. Saddoris and VanHorn are very wasted and attempt to get Morris to take a shot, but Morris refuses. Morris convinces them to leave and go to a different party down the road. Saddoris insists he drives, exclaiming he is fine to drive. As they leave, Saddoris and VanHorn start doing shots again, attempting once more to get Morris to take one. Morris continues to deny his friends. Taking shots, Saddoris is distracted and rams right into another car. Morris is sent through the windshield, due to wearing no seatbelt, and killed instantly from such mass force.  In the other car, Alysha Dobash and Becca Whitchurch both had injuries. With both girls unconscious, they were transported to the hospital. Morris was sent to the morgue, while Saddoris was sentenced to 10 years in prison. Near the end of SKID, a very emotional poem, read by Morris, played over the process of Morris being transported to and into the Hurst. With Barrett and VanHorn walking away with minor injuries

“The kids who find it a joke kinda open up their eyes and realize how severe it is,” says Morris. Morris thinks SKID can show students that drinking and driving can be a serious situation and shows them the effects on them, their family, and their friends. Morris feels that SKID can help people be more cautious about what they are doing at night”.

Saddoris, playing the part of the DUI driver who goes to prison for 10 years, says that SKID was heartbreaking for him. “Knowing that you are the reason why your best friend is dead is just like-  you can’t get over that. It changes your perspective on everything”. Saddoris’s advice to future drivers and current drivers, do the right thing. Colton felt that SKID was very real and sitting in the back of the cop car listening to his apology made him realize just how real it can be.

Neuman says it’s a very impactful, and very realistic when it comes to the consequences of bad decisions. Neuman has only attended SKID once in the past. Knowing it wasn’t `real, he found himself very emotional after watching it. “The visual nature of it. Seeing it,  Hearing it, watching it”. Neumann feels the visual nature of SKID is what impacts students the most when watching this graphic skit. Neuman is very happy that some seniors including Daisha Crickmer and Zach Ancalade are taking part in the emergency response.