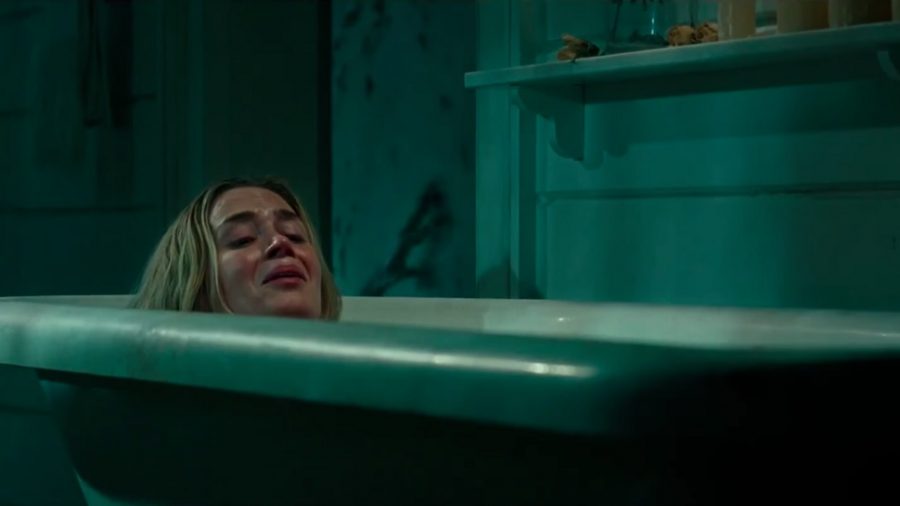 Silence has never said so much. A Quiet Place brings new life into the suspense thriller genre and encapsulates a new audience. The film was marketed amazingly and had audiences ready to see what this movie had to offer. The stars John Krasinski and Emily Blunt, husband and wife, play a father and mother in this film. Krasinski, who has been proved himself to be more than someone who looks into the camera awkwardly as of late, also directed and came up with the story for the film. That alone is beyond impressive.

From the start of the film, you get a sense of anxiety that keeps you on the edge of your seat. The use of sound is so magnificent. Each little noise makes you tense up. The story, without really giving anything away, is an emotional tale of family. It asks the audience to feel what this like. The experience within the theater also throws you into the movie. The theater, a place that the audience should be quiet as is, asks this even more of them here. You feel like you’re apart of the family trying to be as quiet as possible. You feel each characters turmoil and eventually begin to love these characters. The movie is an immersive experience that really pulls you in.

Within the first five minutes, you are pulled into the world and know the struggle here. Based on footage from the trailer you think you know what’s gonna happen, that’s an advantage this film has over you. The youngest child is killed within the first few minutes of the film. This event leaves you with your mouth dropped wide open. The trailers gave an effective idea of what the movie is and would hold, it made us think we knew what was happening in it.

The daughter character, who is deaf and actually portrayed by a deaf actress, plays a large part in the plot. Her actions either tick you off or tick you off. up until the last second is when she truly becomes useful to the plot. The end of the film is a huge heartbreak. When the mother goes into labor (which, why would you choose to have a baby in this world?) and the alien creatures infiltrate the house. The boy must light off fireworks to distract the creatures. After this, the children must gather on a silo. This event leads to another encounter with the creature. The father must, in turn, save his kids. He does this by sacrificing his life. The scene is highly emotional as John Krasinski puts his all into it as he signs out, ‘I love you, I have always loved you”. The scene was extremely emotional for me and the friend I went with.

A Quiet Place is a great film. Its unique in its storytelling as we don’t really get silent films anymore. I think of this movie as kind of a modern Nosferatu, being quiet and yet still effective in its storytelling. When actual dialogue is used it’s used well. The use of it shows us true emotion and brings some more life to these characters. A Quiet Place gets a B+. The film is not perfect, but I still recommend it.