Ready Player One, Nostalgia at its Finest 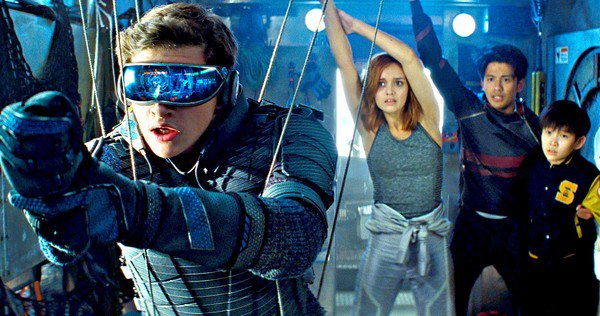 Ready Player One is pure nostalgic fun that doesn’t focus purely on nostalgia. Steven Spielberg encapsulates audiences with beautiful imagery of the video game world of the Oasis. The oasis could’ve been something that audiences couldn’t understand but the way Spielberg introduces it eases audiences into this lush virtual world. The visual effects for the oasis are piled on and jammed full of Easter Eggs. Each frame has something new to offer in terms of nostalgia. Something I was worried about when walking into the theater was if the movie would just be reference the movie, luckily I was wrong.

The story is pretty simple and feeds to plots from some great movies of the 80’s like Tron. A big great world that an evil company want to take over and own. But, it does offer some new ideas. To own the Oasis you must find three hidden keys in three different challenges and unlock a gate. The challenges are complete and utter fun. The first being a wild race through virtual New York City that features the like of King Kong and the T-rex from Jurassic Park. The visuals in this scene are fast paced and full of cars crashing, Dinosaurs eating cars, and King Kong destroying roadways. The scene is a rush of adrenaline and keeps you on the edge of your seat. The second challenge is amazing and one of my favorite scenes in the entire film. The music from the classic movie they enter just reminds me of my first time watching said movie.  The final challenge is accompanied by THE COOLEST battle scene ever.

The big battle at the end of the film is a huge selling point to this film (other than the huge 80’s throwback factor) as it’s all of your favorite characters fighting against an army of bad guys. Now, add in The Iron Giant and Mechagodzilla. If that doesn’t sound absolutely awesome I don’t know what does. The action in this movie is spectacular and enthrawls you with every second of it.

The characters are all extremely likable. Wade Watts or Parcivale is our hero and acts like the heroic nerd from movies of the 80’s. Throughout the movie he deals with what seems to be almost a virtual addiction. This is pretty interested and trying to get over it is an fascinating thing to see and actually influences his character throughout. His crush artemis, is a very strong character showing emotion and even being the leader of a “rebellion”. Her character I’ve heard changed a bit when doing the book to screenplay adaptation. She is more of a character than a love interest for Wade to drool over. She helps move the plot and even gives us an idea of what relationships in this world are like. Dating over the oasis is hinted at. Artemis talks very very briefly about dating over the oasis and I would’ve liked to see more of that. Seeing a deeper idea expressed in this world would be so interesting for audiences to see.

The score in the film is chalked full of references to movies of the 70’s and 80’s. You can hear a lot of hints to back to the future and other great films of that era. In a certain scene the iconic haunting score of The Shining looms through the theater. The score isn’t the only amazing part of the film. The film has several what I call bops. The iconic songs of the seventies and eighties ring throughout the film. In the theater I saw people nodding their head to the songs throughout.

A big worry I had in the film was if it would rely too heavily on references, luckily I was wrong. The film does have various references to classic properties but the film is not solely ¨wow, look at this¨. Ready Player One is summer fun previewed in the spring. I give this film a B+. It´s a fun film through and through. I give Ready Player One is worth a B+.