the story of some sauce 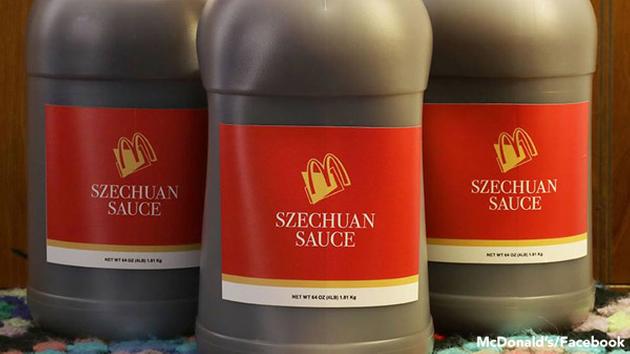 On October 2nd, 2017 mcdonald’s brought back a sauce because a joke was made about it in the popular animated show Rick and Morty’. The date for the revival of the sauce was revealed a month in advance and you can bet people across the united states marked their calendars.

The sauce originated as a cross promotion for the hit animated Disney movie Mulan. Rick and Morty made a joke about the sauce in its season three premiere. Making the joke ‘That’s my whole motivation Morty!’ with only a few lines it sparked the minds and taste buds of thousands of fans.

On the fateful day when specially elected mcdonalds got the sauce lines formed around the block. Mcdonalds did not prepare for this. Each establishment got approximately twenty packs of sauce and some didn’t get any at all. This lead to riots or even some people being killed. All this over some stupid meme sauce.

Mcdonalds after realizing their mistake decided to re-release the sauce in february, 2018. On that day the sauce returned and America was reintroduced to the now world famous, Mcdonald’s Szechuan sauce.

I was lucky enough to have a friend who A, can drive and B, likes chicken nuggets. We ordered sixty chicken nuggets and got a mass amount of the famous meme sauce. Now that the sauce has been released i can do a review of it.

The sauce has a taste of soy sauce with a tangy hint. The tangy hint almost feels like a hint of ketchup which wouldn’t surprise me, it’s mcdonalds. A hint of garlic is also subtly thrown in. The taste of the sauce is really good with the chicken nuggets. I really enjoyed the sauce.

This sauce was good, really good. The first time that this sauce was reintroduced was awful. When fans of the show came for the sauce it was a place of toxicity. The fan base of the show can be very toxic for newcomers to the series Rick and Morty. This toxicity spilled into this event. Luckily Mcdonalds realized their mistake with this fanbase and recouped their demands.

The Szechuan sauce was good, not good enough to start riots over though.