If Wrestling Was Easy, They’d Call It Basketball 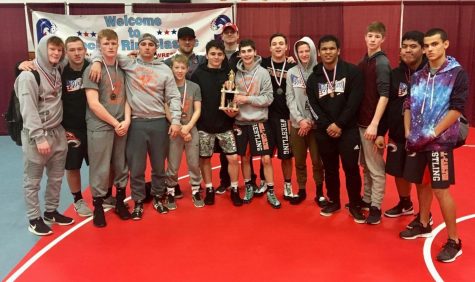 The 14 men of the team come together fro a team photo with their awards from the meet.

With a team consisting of 14 young men, each athlete has had a significant impact on the team. YC’s wrestlers have improved a lot since last year. From gaining more freshmen, to soon to be saying goodbye to our seniors, the team has made a good connection. The Tigers have been coached by Sean Nonamaker for 3 years. As wrestling is a pretty independent sport each athlete has their own goals for the season. Sophomore Ethan Tindall and Senior Zack Culver both have the same main goal, going to state.

Culver has been wrestling since he was three years old. His best experiences have been just the overall community around. Everyone is always super supportive and striving for the best in the program. Coaches have helped shape Culver into the athlete he is now with A lot of self discipline, they taught him how to properly discipline himself, treat himself to get towards better respect and towards accomplishments. There is always so much going through one’s head before a meet. Culver said “When I am preparing for a match I usually am not caring, I clear my head first and get my body warm, then second nobody can beat me and getting that through my head as well as putting in my head “I am the best one here and nobody can beat me” and even if there is someone who can beat you, you got to get it through you head that you can win and that you are going to win.  You got to look at your opponent, see what they’ve done, see what their accomplishments have been, but for me it is mostly just trying to get out of my own head and clear everything out.”

He said that he plans on wrestling post high school. “I’d hopefully go wrestle for Pacific, but don’t quote me on that.” The biggest thing Culver wants the public to know is that Nonamaker has a program that people need to believe in. He said that people realize that the wrestling program has improved a lot in the last two years, but what people don’t realize it that because of him. The state tournament is everyone’s main goal. “I want to be on that podium at the state tournament.” Culver’s placing in this season have been second at both the McKay tournament and the Pacific Rim tournament.

Tindall states that he has done a lot better in matches since last year, placing fourth at Pacific Rim, fourth at McKay, and fifth at the Bob Bishop Tournament.  All the wrestlers look forward to going to the State Championship tournament. “We have all worked towards going to state” Tindall said. When training to go to state, the wrestlers have all been putting in a lot of effort to improve. His worst experience while wrestling has been last season at the Pacific Rim tournament when he had messed his knee up.